Oops, I called this RV Life.  The truth for this series, now and those that follow that will round out what is the Spring 2015 Road Trip.

There is RV Life going on as well.  Things like:

How many meals of leftovers to I want to plan to cook today?

Where is the next best priced diesel located and why aren't people listing diesel on www.gasbuddy.com?

Should we keep moving or spend a few nights in one location?

Why is the battery registering random levels of storage?

How do I decided on an on the road RV Mechanic in an unknown town?
PS..  they were great!

How many cities do we need to be watching the weather in at the same time?

Why is it that is takes most of the stay to learn what's best about the place?

Posted by Unknown at 8:08 PM No comments:

In the ground, me, in the ground?  Claustrophobia intact.  Well, one of the Caverns had you going down an elevator..  no!  The ratings were really high on the Luray Caverns and you could walk in.   That's the one for me.

Stalagmites or Stalactites?  Ground by the same process - Top down drippings that remain attached to the ceiling and walls are Stalactites,  the ones that grow from the bottom up from the drippings of the Stalactites and moisture on the cave ceilings are Stalagmites.  The areas are protected but if you could walk anywhere in the cave, you would be stepping on the Stalagmites and hitting your head on the Stalactites.  There are mineral deposits and different mineral compositions determine the color and shape of the Stalagmites and Stalactites.  Each of them are formed over millions of years taking   (a soon to be found ) number of years to grow by a cubic inch.  The caves are from 450 million years ago and continue to grow today.  I received a "Cave Kiss" (minerals dripping on me) more than once during our underground tour. 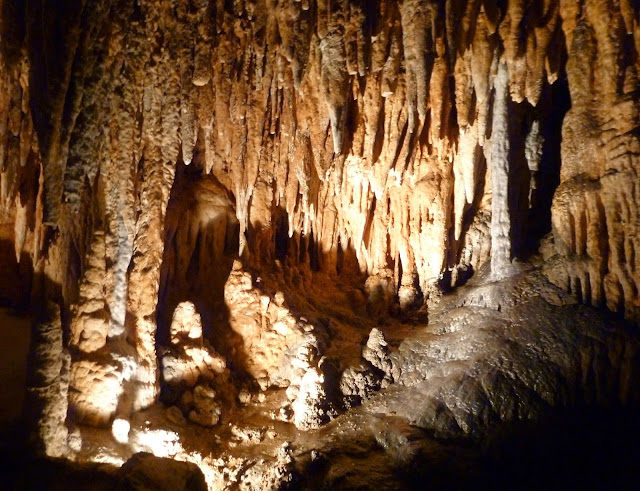 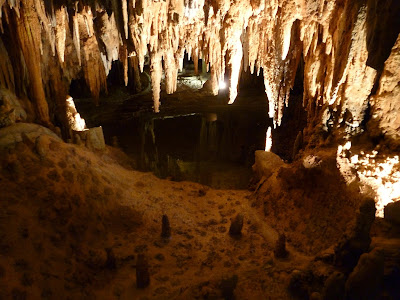 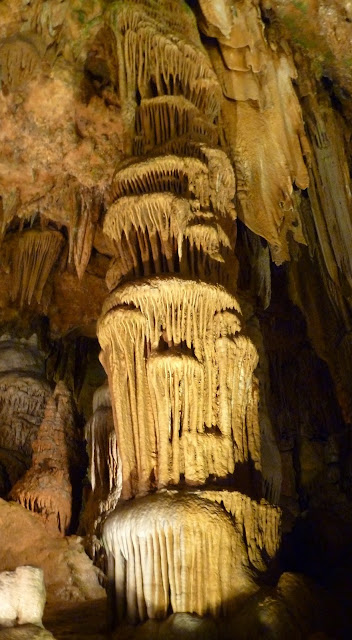 Posted by Unknown at 7:52 PM No comments:

Sometimes it takes Ted's keen eye to spot wildlife, other times they just meet us on the road.

Last night, driving the car on the Skyline Drive in Shenandoah National Forest, he said, "I'd like to see some bear." The words weren't out of his mouth when we say there three dark splotches in the woods. Ha! Bear. It was just before dusk, we were able to sit in the car and watch them for a while.

Travel sequence of these posts have long been left behind in the process of traveling.  Here are a few shots of the Grand Canyon.  Too many words that will have to wait for later.

Monticello - vision and reality - Thomas Jefferson's vision, inquiring mind, and place in time and space provided him the opportunity to create his scientific study of farming while creating a homestead of introspection and curiosities. I have long admired his vision yet knowing he lived in that time of owning humans, a conflict that he could not rise above because of the need - in that time and space - to construct and grow his vision.  He did manage to free a few, five I think, but it was his family that finally freed all of them.

The vision, the hilltop, the curiosity, the gardens, the traveling and creation of a home filled with curiosities not known in the area at that time, the taste for French food and wine that led to seven failed efforts to create a vineyard in Virginia - that now has found the key to flourishing vineyards throughout the state.  Of course, in his time, the transit of grapevines from France to Virginia took a little longer.  But since his time, following his plan, there is a vineyard at Monticello.  Tour guides noted that many of his efforts in gardening failed since he was more interested in seeing what could grow than only planting those things that he knew would grow.

It was a few men that took the lead in the American Revolution, Jefferson was among them.  Thirty-three years old when he wrote the draft, "Life, Liberty, and the Pursuit of Happiness."  It was another fifty years that found him holding on the last few days of his life, fifty years later after a life full of investigations, explorations and public service, that he said his final words, "Is it the 4th of July?"
Jefferson's eighty-three years were full of scientific inquiry, construction and a commitment to the betterment of life for the human condition.

For more: for I do not want to repeat what is so easily accessed these days: Alas, falling down on the inspiration of a man who worked tirelessly throughout this life.  Click here Thomas Jefferson.

Monticello offered a look into Jefferson's world but what I have long wanted to see has been his gardens. 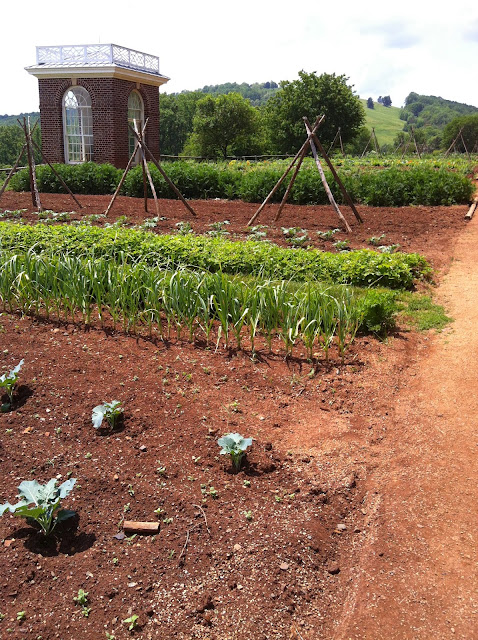 Jefferson did not do the physical work of growing his plants, but his garden notes talk about the plantings, the seeds he grew to share on overseas travels and the seeds that he brought back.  The garden was for nourishment and medicinal.  As the head of the estate he was responsible for keeping the people healty that were at Monticello.  The enslaved people had quarters on the property, some included in the main house at the lower level and others that lived closer to the river below.  Often in dry seasons, the household had to purchase food from the enslaved people that lived by the river because the mountain top was so dry in the summer.  Sometimes the wells dried up for years.  There were two long patios that had water containment systems built into them.

The reason for taking photographs - for me - is to share what has caught my eye.

A story in a few words with an images conveys so much information.

Sometimes, I've just seen something I learned about earlier but now have the opportunity to capture an image that brings that idea, item, story, insect, animal, child, human, landscape, flower, whatever it is to life by being able to share it with you. I've seen it, now I want you to as well, so you can learn as well or simply to enjoy the beauty that stopped me along the way.

Traveling today from Durham, NC to Waynesboro, VA along Rt 29 left the NC landscape of tobacco sheds but not red soils.  Spring was in full bloom and moving on in Durham, but just taking hold on the Blue Ridge Parkway in Virginia. 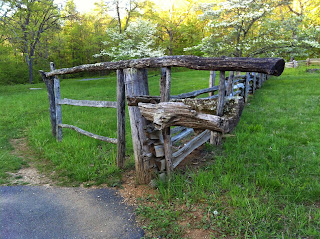 Posted by Unknown at 7:20 PM No comments: